Madame Charlatan. Telling Misfortunes under a fog of musk and a cloud of fag-ash…….

My mother is also a Misfortune Teller, though it was many years before I appreciated what a skill she had. When I was a child, she’d often say things to me like; ‘Carry on as you are young lady and you’ll get a back-hander’, ‘If you interrupt me one more time you will go to bed without any dinner’, or ‘Stop doing that RIGHT NOW, or there will be hell to pay’. And do you know what? It always came true. She really could predict the future. Her forebodings were so accurate. It was uncanny. 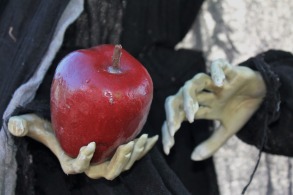 My husband (may he try and rest in peace), was always a bit nervous around my mother. She would just appear in the room like some manifestation. Gave him the heebie-jeebies. He always thought he could see her aura. Black as coal. A kind of fuzziness that enveloped her being, it moved when she moved, leaving a trail. I suspect it had less to do with my mother’s other-worldliness and more to do with her lack of enthusiasm for personal hygiene. Either way, when she was in the room, you knew she was in the room.

When my husband passed away (may he please try and rest in peace), my mother came to the funeral dressed as Carmen Miranda. Full basket of fruit on her head. She said ‘Now that miserable cockroach had gone, it was cause for celebration’. I thought it a trifle unreasonable. A woodlouse maybe, but he was never a cockroach.

My husband’s death was one Misfortune that even I, with my prodigious powers of foresight, was unable to predict. He was killed by a dog. Awful, awful way to go. He tripped over our little Chihuahua, landed face-down in her food dish, snorted a juicy morsel and choked to death. Although he cried for help, no sound could escape his airway, blocked by the tender chunks of meaty goodness that dogs can’t resist. Now with added gravy.

Still, we had some good times before he died (may he for the love of all that’s holy PLEASE rest in peace). And due to my psychic and spiritual skills, I am able to stay in touch. Not always at a time of my choosing. He sometimes joins me on a trip to pick up my prescription, which I don’t mind, but I could well do without the nightly visitations.

Old Mother Charlatan is still with us. Infesting rooms at an old people’s home. Telling them they’re all going to die soon. They’re all in their nineties, of course they’re going to die soon, but no-one needs reminding or given the details of which hospital ward it’ll be on. I wonder how my mother will go? I polish that crystal ball like crazy looking for clues. Will it be sudden? Soon? I think a squirt of air freshener could do it.

Putting the Shame back into Shaman

Cross My Palm With Silver

Old Mother Charlatan (you are here)