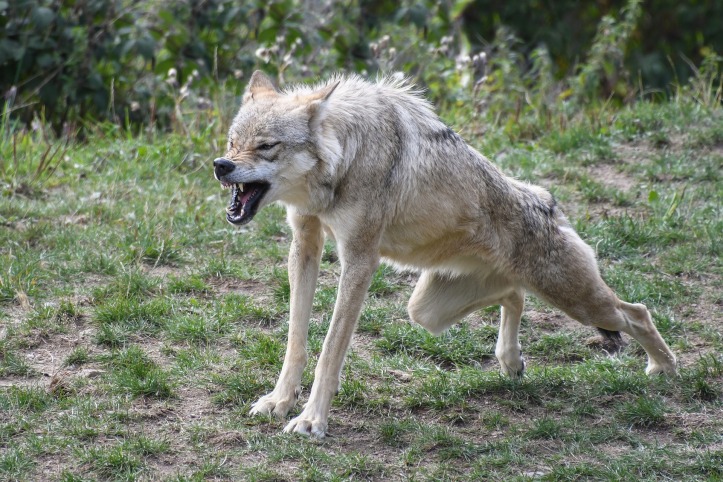 ROUND ONE A battle with bureaucracy to secure some help, not least financial, after being made redundant at Christmas, 2016.

ROUND TWO After nearly 2 months of unemployment, I finally start a new job, but not all goes to plan.

ROUND THREE A final showdown with the Department for Work & Pensions and their sidekick The Job Centre.

Regular readers: Sorry for the repetition there.
Newcomers: Hi. Welcome to Admin Hell*!

Round Three left me beaten and bruised, but I had to Suck It Up Buttercup, as a new battlefront had been brewing, the Dogs of War had been unleashed and the Alpha Male was a woman in HR.

My new job was just dandy. On the whole. I got to wear a purple pinny and there was a cafe across the street that cooked up soul-restoring homemade soup. We now had a full complement of 4 staff, although we mostly worked alone. I got on fabulously with everyone, especially my manager who was our longest-serving employee. She’d been there 6 weeks.

I mentioned previously that the store did require a decent amount of product knowledge. Customers would quiz you for recommendations. There were health implications. But the hierarchy, for reasons best known to themselves, provided no training whatsoever. We had some leaflets. We didn’t have the luxury of learning from our peers. As per above, no-one had been there longer than 6 weeks. ‘Wing It’ is what we did and with the help of Google, we muddled through.

As with most new jobs, there was a bit of form filling. National Insurance number, personal details, next of kin etc. I completed it all in my very neatest writing and popped it in the post. Or so I thought. It turned out that what I’d actually done was open Pandora’s Box. Damn self-sealing envelopes. And that very important ‘you must return this or we can’t properly employ you and you won’t get paid’ paperwork went missing. Allegedly. Twice.

My third set of papers reached their destination, somewhere in the Midlands, just south of Hades. A very blunt and discourteous email arrived asking why I had provided a copy of my driving licence when I wasn’t asked for it. Ah, I can explain, because (I naively thought) I was using my initiative and trying to be helpful. Stupid Lockwood. I’d been asked to provide a piece of ID from a given list. Unfortunately, I was unable to. The only items on the list that applied to me were Passport (mine was 11 years out of date) or Full Birth Certificate (I only have the short version). As my driving licence has my photo, my address, my signature, my date of birth, I thought that would be a suitable substitute. The Harpy disagreed. With venom.

The purpose of the above mentioned documentation is to provide ‘Proof of Right to Work in the UK’. Apparently having a National Insurance number doesn’t cut it. I’d never ever been asked for ‘Proof of Right to Work’ in any previous job. I politely enquired if my passport was acceptable even though it was out of date. The important factor was I’d been issued it in the first place, a fact I confirmed via the Government’s own website. I even copied, pasted and emailed the relevant section. The Harpy huffed. With venom.

I could’ve applied for a copy of my Full Birth Certificate, but time was of the essence as we were fast approaching the cut off day for that month’s wages. The cut off day came and went. I didn’t get paid.

Already worthy of its own sit-com, this farce was starting to look implausible on paper. Alas, it was reality; I had a key to the shop. I had a key to the safe. I worked alone and was, during those times, entirely responsible for all the money and all the stock in the building. I was trusted with the contents of the safe, for banking and for securely locking up at night-time. And yet I wasn’t on the payroll, I wasn’t being paid and couldn’t be officially employed until my ‘Proof of Right to Work in the UK’ was sorted. As was often said at the time, you couldn’t make it up.

I ventured a friendly, enquiring email to the Harpy. ‘Any news yet from the Home Office?’
An almost instant reply, barely legible through the spit and poison;
‘Yes. Your out of date passport will be adequate proof’.
So the Home Office happened to reply just then did they? How long had that barbarous battle-axe been sat on that piece of news? Brimstone and fire shot out of every orifice and I BURNED.

So, the Man from the Ministry said yes. A tick was placed in the box marked ‘Legally Employable Member of the United Kingdom & Overseas Territories’.

As we headed towards the end of March last year, despite not knowing a flying fig about half the stuff I was selling to our unsuspecting customers, I felt triumphant and quite delirious in anticipation of the coming payday. I was officially employed and on the payroll.

On the 21st March last year, we exchanged contracts on a house we started to fear we’d never live in.

On the 24th March, I finally got paid after 7 weeks in my new job.

The following day, my manager handed in her notice.

Two weeks later, I WAS MADE REDUNDANT.

*Admin Hell; A moniker borrowed from Middle-Aged Warrior (go visit). Admin Hell is a fiendish place full of dipshits that don’t know their arse from their elbow. A place where telephones loom large, yet no-one seems trained in how to use one when promised, nor does the receiver appear to receive. Any words that do get through are translated into a foreign language or simply repeated ad infinitum. In the centre of Admin Hell is a carousel that carries all your important paperwork. It never stops rotating, rendering it impossible to retrieve critical information. Occasionally it speeds up and centrifugal force shoots random documents into outer space, never to be seen again.

For anyone wishing to laugh some more at my misfortune, I would now like to invite you to a little corner of my world that I’ve imaginatively called ‘Easter Redundancy’ for the next chapter. Please make yourselves comfortable and I’ll see if there are any biscuits left for us.